Are you curious about the Rainbrew slot review? It is part of a collection of slot machines brought to Microgaming by JFTW, a smaller developer (Just For The Win).

Rainbrew is one of these games that is only available on the Microgaming platform. The subject for this game is similar to the usual Irish theme, but the elements end up making it a lot more unique than it appears at first.

A Brief of Rainbrew Slot Review

Though there are generally just 243 possibilities to win on the 5 reels, this can be boosted to 1125 at times when the middle columns receive up to two more symbols.

The maximum reward for this game has been set at $136,000, according to the release. Horizontal reels, free spins triggered by scatters, and regular and expanding wilds are among the features.

In Rainbrew, the amount of lines/ways to win has little bearing on your wagers. You simply choose a total bet, which can be as low as $0.10 or as much as $100.

It’s been described as a medium-volatility game that may payout up to $136,000 for a single spin, which is the equal of 1,360x total bet.

The RTP for this slot has been set at 96.02% by the developer. We also know which aspects of the game contribute the most.

The main game only accounts for 17.43% of the money won in this game, the free spins for 27.93%, and the SideWinder feature for a stunning 50.66%. The total is 96.02%, as previously stated. Obviously, the features are the most important in this case.

Rainbrew’s layout is likely to be odd, given the 3-5-5-5-3 reels you’ll find yourself using at times. Some of the bonus symbols can only be found on the top and bottom horizontal reels, bringing the total number of chances to win to 1125.

There are three different varieties of wilds that can appear: normal, Top Wild, and Bottom Wild. Each one has their own designated regions where they are permitted to appear.

The Sidewinder Feature, which is responsible for the majority of your winnings, gives you the option of playing with 576 or 1125 ways to win. They do so by activating the top and bottom horizontal reels, which are located on top of the middle 3 sections, with two wilds each.

The free spins are also quite essential, and you can get them if you get the scatter on the second and fourth reels. You could be awarded 6 or 10 free spins. At this time, the Sidewinder feature is always on.

The free spins are where the big wins usually happen, and the goal is that you’ll obtain up to three wild reels to assist you out.

The concept, on the other hand, does not appear to be as engaging as it could have been.

It’s a fairly standard Irish-themed slot, with images of a leprechaun, a pipe, a leprechaun girl, a mug of rainbow-colored ale, and the barrel from which it comes on the reels. Other symbols have various logos and Celtic design features.

In conclusion of Rainbrew slot review, it is a Microgaming-exclusive game, has several great features to offer, as well as attractive graphics, so it’s easy to overlook its lack of a unique theme/story. 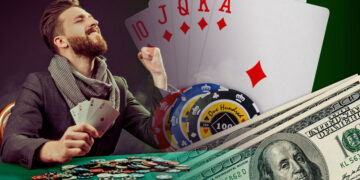